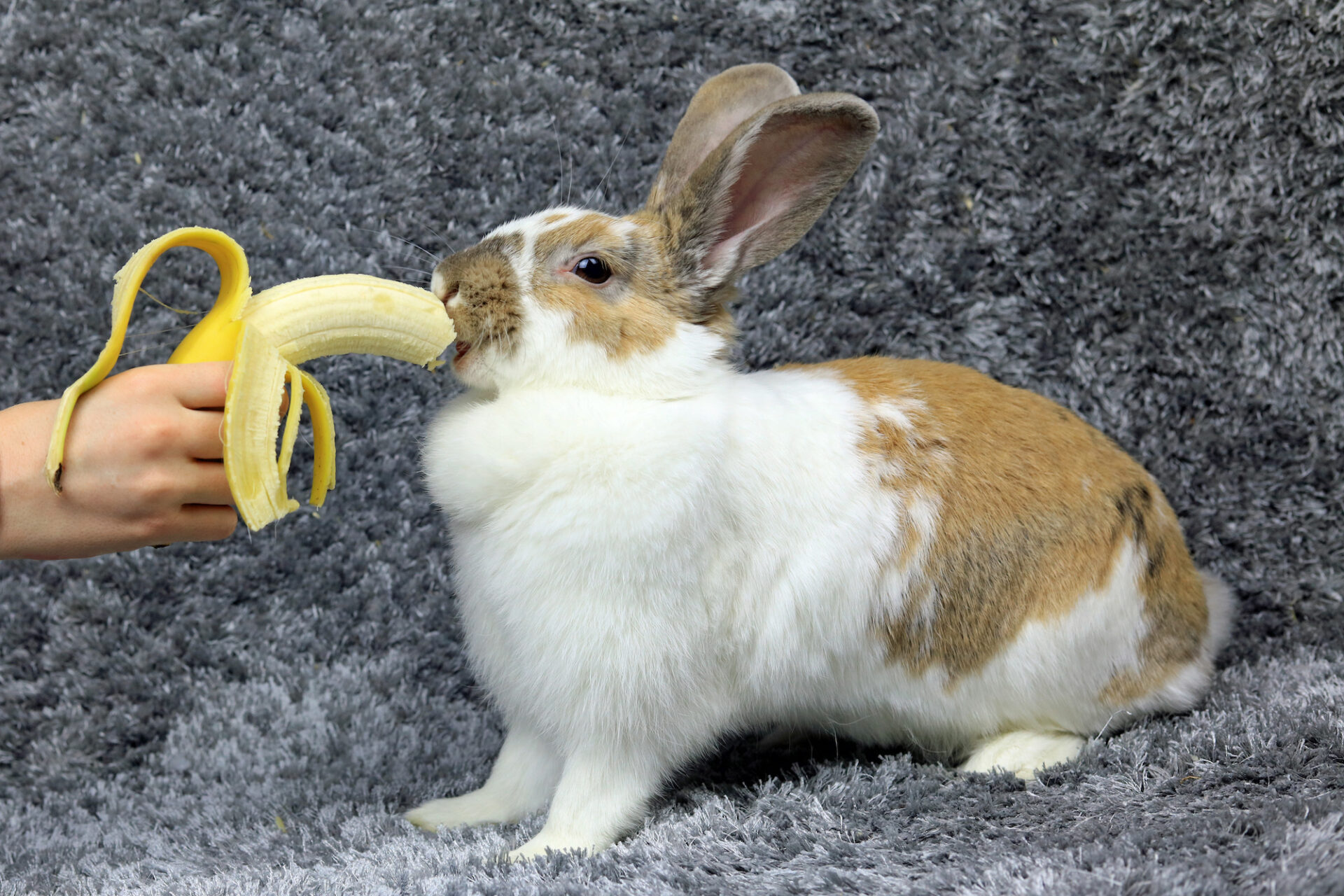 Yes, rabbits can eat bananas. However, rabbits should only be given small amounts of banana as a special treat due to their very high sugar content. One teaspoon of banana once or twice a week is enough.

Your rabbit will love this treat, but you should rotate it with other fruits to stop them getting addicted to the sugar and ensure that they have balanced diets.

Risks of a Rabbit Eating Banana

One thing you need to be vigilant about is the state of the banana. If it’s overripe (when ethylene gas turns it from yellow to brown) the gas also changes the taste, texture, and nutritional value.

As a banana ripens, the resistant starch which made up 80-90% of the banana is converted into free sugars. These sugars can alter bacteria from the rabbit’s gut, leading to loose stools, stomach pain, and even obesity.

Bananas with a slight green tinge are the healthiest as they have the least free sugars.

Always make sure the banana isn’t moldy, and it’s served in small portions.

Be aware of the high sugar content too, which makes bananas high in calories. As well as causing dental problems, it can lead to weight gain, and digestive issues.

How Much Banana Can Rabbits Eat?

Bananas count as a treat for your rabbit.

As a general rule, your rabbit should only have treats two to three times per week. You should also vary the fruity treat that you give your rabbit. For example, banana one week, strawberry the next, and apple slices after that.

In terms of portion size, for a rabbit weighing two pounds, one teaspoon of banana is a good amount. A seven pound rabbit could have two teaspoons of banana. No rabbit should have more than two teaspoons at a time.

Treats should only make up 5% of a rabbit’s overall diet. They should be having 80% hay, 5% pellets, and 10% fresh vegetables. This is all as well as unlimited access to water.

As well as being an addictive, tasty treat, bananas are also a source of nutrients that can benefit your rabbit:

Yes, rabbits can eat banana peels, as they are non-toxic to rabbits. However, they are packed with sugar and starch – so you should only give them a little bit of peel. You should also make sure that the banana is organic before giving the peel to your rabbits, to prevent them from ingesting any harmful pesticides or fertilizers.

Yes, your rabbit can eat banana leaves if they’re organic. They are safe for rabbits to eat and if they have no chemicals on they can be slowly introduced into their diet. Banana leaves would contribute towards the 10% fresh vegetable part of their balanced diet.

No, rabbits shouldn’t eat banana bread. Although they would probably love banana bread, they’d struggle to digest it due to the rich starch and carbohydrate levels.

There’s also a risk of choking if a rabbit tries to eat a too big piece of banana bread.

If your rabbit does manage to eat some banana bread, keep a close eye on them. As always, if you’re concerned about their health, take them to a vet.

Can Rabbits Have Dried Banana Chips?

Yes, rabbits can have banana chips, as long as they’re specific rabbit treats. Banana chips for humans are often sprayed with a sugar solution that’s too much for rabbits to handle.

They can also only have banana chips in small portions on occasion since they’re so sugary. Your rabbit will think they’re very tasty though and love them as much as they love fresh bananas.

No, baby rabbits can’t have bananas. Rabbits should be at least three to four months old before you start introducing new food into their diet. Before this point, stick to age-appropriate hay and pellets once they’ve weaned off their mother’s milk.