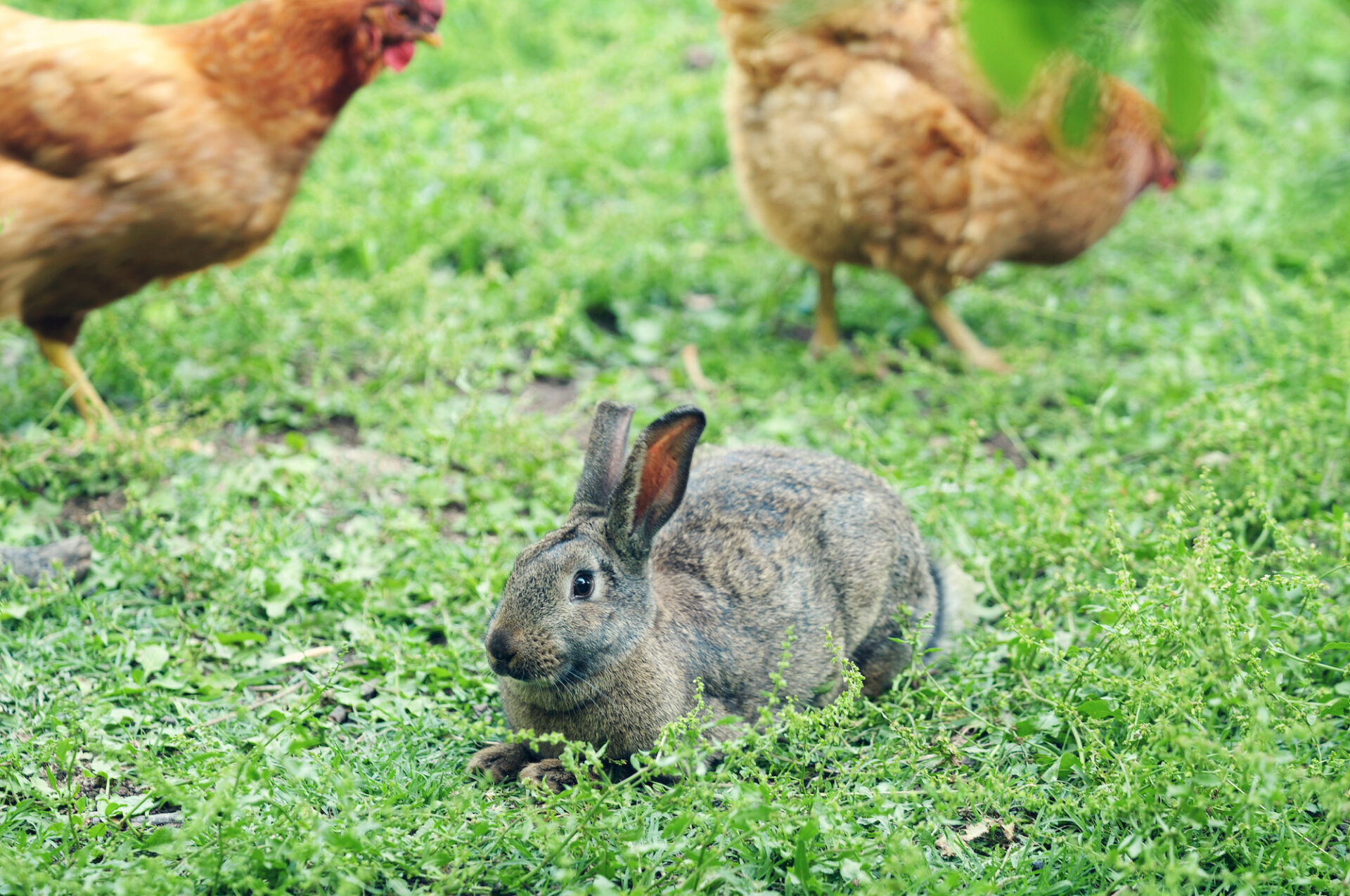 Rabbits and chickens can get along well together, but only as long as they get adequately introduced and there is enough space for both animals. However, there are a few things to keep in mind before you decide to keep these animals together. This living arrangement won’t suit all rabbits and chickens.

There are a few things you need to take into account before you put your rabbits and chickens together. The coop needs to be a minimum of eight square feet to have enough space, and it’ll need to be bigger for larger breeds. You should also have one chicken for every four rabbits living in the coop.

But although putting your rabbits and chickens in the same coop can work out, it’s not something we’d do if it can be avoided. Read on to find out why before you make your decision.

What Are the Benefits of a Rabbit/Chickens Living Area?

Chickens will eat up any insects that may harm your rabbits, such as slugs and snails. Rabbits are less likely to get sick from these insects if they have some chickens around.

Chickens can also warn the rabbits of potential danger. If they see a predator or other animal approaching, the chickens will make a lot of noise, and the rabbits will be able to hide in time.

Both animals can benefit from the heat that the chickens generate too.

What Are the Drawbacks of Chickens and Rabbits Living in the Same Space?

You should only consider keeping chickens and rabbits together if you have a vast area and want to keep predators at bay. There are a few risks you should consider before you decide to put your animals together.

Size of a Rabbit and Chicken Coop Combo

You can place your chickens and rabbits together in a large coop if you have enough space. The minimum size for this would be around 8 square feet. This allows the animals plenty of room to move around and prevents them from feeling cramped.

What is a Rabbit and Chicken Coop Combo Made from?

A rabbit and chicken coop combo can be made from various materials, such as wood, metal, or PVC pipes:

How to Build a Rabbit/Chicken Coop Combo

Follow these steps if you’re wondering how to go about building a coop:

Ideal Ratio of Rabbits and Chickens Living Together

You can have one chicken for every four rabbits. Don’t have just one chicken or one rabbit. Have at least two animals from both species for their comfort. This is very important, as living alone can have a huge detrimental effect on rabbits.

How to Get a Bunny and a Chicken Living Together

If you want to introduce a rabbit and a chicken, start by keeping them in cages next to each other. This will give the animals time to get used to each other’s scent before they are let loose. You can use a dog crate inside your coop for added protection.

Once the animals seem comfortable with each other, you can let them explore your yard together. Make sure only to do this if you have a vast fenced-in area or an electric fence. If the animals live in a coop with a run, make sure you cover it at all times.

Some people recommend having the animals separated at night, as this is when predators are most likely to attack. You can do this by building an extra coop for your rabbits or putting them in their own cage during the night.

You should also be mindful of the poop from each of these species. Rabbits and chickens expel two very different types of droppings, and they carry different diseases. Bunnies can get sick from exposure to chicken poop.

Are My Chickens and Rabbits Getting Along?

If you are unsure whether or not your rabbits and chickens are getting along, keep a close eye on them. It is best to separate the animals if you see any fighting. Signs of aggression may include biting, chasing, or hissing.

Do Rabbits and Chickens Attack Each Other?

Rabbits are cute and gentle animals – but will get aggressive if needed. They have charged chickens and injured and killed them. Big and territorial rabbits are capable of killing a chicken,

If you let them live together and a fight starts, separate them immediately. You may need to put up an electric fence if you can’t supervise them constantly.

Chickens will attack a rabbit if they feel threatened. They can peck out a rabbit’s eyes, so it is best to keep them in separate coops if they don’t get along. A rabbit might break a chicken’s eggs if they want to lay in the nesting box, make sure the nesting boxes are far away from each other.

What Are Some Tips for My Chicken/Rabbit Coop?

Check out these tips to learn the basics on chicken and rabbit coops:

Do Rabbits and Chickens Spread Diseases?

Both chickens and rabbits can carry diseases. Make sure to keep your animals healthy by feeding them well and giving them plenty of space to move around in.

Your rabbits and chickens can also share parasites, such as lice, mites, ticks, and Coccidiosis. Treat your animals for parasites, as they can cause disease and death.

Are Rabbits and Chickens Compatible Pets?

Rabbits and chickens can be great pets together.

But do rabbits and chickens get along immediately?

That is hard to say because you need to give both time to adjust, and signs of stress may not be obvious at first. If they get along, you can keep them in a large coop with a run or in their own cages.

Let the animals free range frequently, so they remain healthy and happy. Both animals share similar predators, so keep a close eye on them and in a safe cage.

Rabbit-chicken combos are possible if you take the proper precautions. Make sure to give your rabbits enough space to roam around without hurting the chickens. Keep an eye on them when outside together, and make sure your coop is predator-proof at nighttime. Never leave them alone when not supervised. Feed them well, and provide plenty of fresh water, etc.