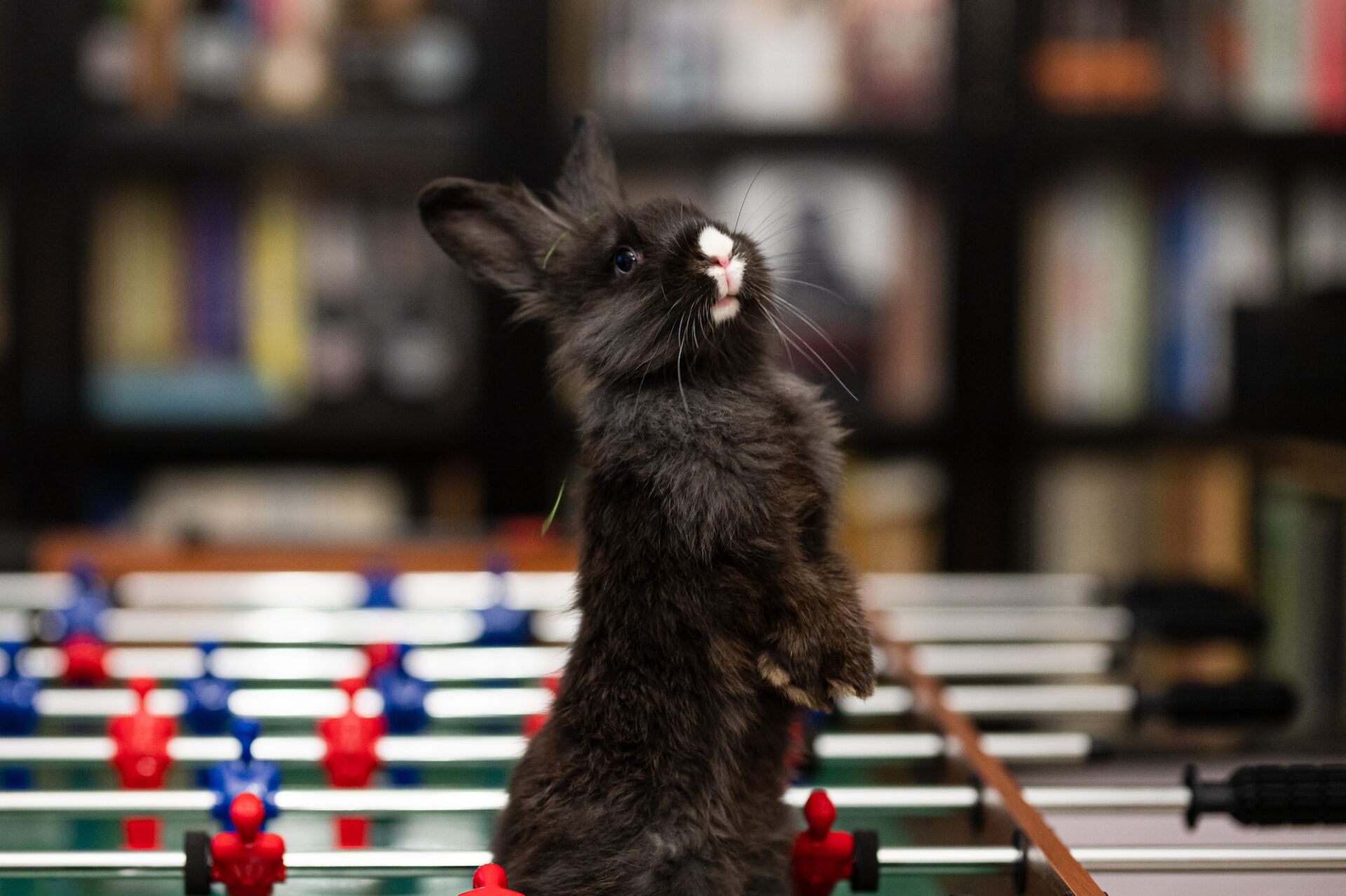 Rabbits are playful creatures, and if you have two or more pet rabbits you’ll probably see them playing to pass the time. This can involve playing with toys, with each other, or with you!

It’s worth noting that if two rabbits are uncomfortable with each other they could be fighting rather than playing. There are some key differences in behavior that should show you if it’s light-hearted play or a more serious fight.

Before two rabbits ever meet, you need to ensure they’re similar in age, size, and temperament. Plus, you need to create a neutral home with separate bedding, toys, and food dishes. Once they bond, the playing can begin.

How to Tell if Rabbits Are Playing?

Typical play behavior is when a rabbit nips at the other rabbit and jumps back as if startled. Look out for the following cues of playing, once you can recognize it, you’ll know whether you need to get involved.

Nipping is often the most obvious signal that rabbits are playing with each other. They’ll bite one another quickly, repeatedly, and softly. This type of play typically follows a clear, three-part structure:

Nipping is how rabbits grab the attention of other rabbits. It’s a fundamental element of rabbit communication. They nip to initiate play or otherwise interact in a non-threatening way.

How do rabbits play together when bonding? Aside from nipping, other common play behaviors include:

Rabbits will have personal preferences as to what type of play they enjoy. Generally, if they enjoy a kind of play by themselves, they’ll also enjoy that activity with another rabbit.

How to Respond When Rabbits Play

Observe rabbits when they play. Their play can turn aggressive, especially early in the bonding process. Rabbits are territorial. While playing, they might suddenly feel the other rabbit is getting too close and lash out.

If the play session starts to turn aggressive, or one rabbit seems like they’re trying to get away from the other, you’ll need to intervene.

Do Rabbits Play with Toys?

Yes, rabbits love interacting with toys! Rabbits will roll balls, chase things, and play puzzle games and a lot of these games can be two players. It’s common to find a bonded pair of rabbits playing with the same toy.

Toys are important for rabbits to have stimulation to prevent boredom, but also useful tools for wearing down their constantly growing teeth (just make sure that they’re rabbit friendly).

What Type of Toys Do Rabbits Play With?

You can buy fancy toys from the pet store or do some DIY to make a toy for your rabbit. Always make sure the toy is rabbit-friendly, and not a choking hazard. Toys from the store include treat puzzles and balls, but your rabbit would be happy with a cardboard box or scavenger hunt!

Will My Rabbit Play with Me?

Yes, your rabbit will usually play with you. If you have a good bond with your rabbit and they’re not grooming or eating, they’ll probably be game. If you haven’t quite bonded yet, get down on their level and be patient and before you know it you’ll be playing in no time.

You need to carefully consider several factors before putting two rabbits together in the same space. This is an important step – rabbits won’t live comfortably or play together unless they’ve properly bonded.

Only attempt to bond rabbits that have been spayed or neutered. Intact rabbits will fight frequently. Bonding is often complicated to achieve.

Both spaying and neutering can occur starting at four months of age. However, you need to wait at least six weeks after the spaying or neutering operation before introducing the rabbits for bonding. Hormones in the body take that long to calm down and change.

Opposite sex pairs bond most easily. Same-sex pairs (two males or two females) are more likely to fight than cross-sex ones. Rabbits often feel more territorial towards other rabbits of the same sex, especially males.

Spaying/neutering takes on an even more critical role when bonding an opposite-sex pair. An intact female rabbit and descendants can produce over 1,300 offspring in a single year.

Rabbits have an easier time bonding when they’re close in age. When they’re approximately the same age, they’ll have similar energy levels so that they can play together comfortably.

Rabbits pair for life. The death of one is often extremely difficult on the other. If they’re the same age, they’ll be able to live together for as long as possible.

For the easiest bonding, pair two rabbits from the same breed. There are 49 different breeds of rabbits and they don’t all get along.

You can pair rabbits from different breeds, but make sure they’re the same size, both as juveniles and adults. Giant rabbits are more likely to attack smaller ones.

Introducing Rabbits to Each Other

Introducing rabbits to each other is a delicate process, requiring more than simply watching for fights. Keep your rabbits safe, and improve the chances of bonding, by following these guidelines.

Above all, always keep a close eye on your rabbits at all times. You want to step in and stop any aggressive behavior as soon as it occurs.

Watch for the following signs of bonded rabbit behavior:

In the early stages of bonding, the two rabbits might not show much interest in one another. Indifference is a good sign as it means the rabbits aren’t fighting. Rabbits in a shared space won’t ignore each other forever, so you’ll still need to observe them.

Rabbits use a variety of sounds and behaviors to communicate. Some of their communication indicates they’re getting along, while other types signal potential aggression.

Watch out for foot thumping, ears that stick straight up, and low growling. All of those sounds and actions indicate the rabbit is stressed.

If the rabbits get along, they’ll sniff each other, nip each other lightly, and possibly make honking noises back and forth. Rabbits make a faint honking sound when they want to mate. If they’re both making the noise, they’re forming a bond.

Due to their territorial nature, rabbits aren’t inclined to share, which means it’s a big deal when they start exploring each other’s possessions.

Sharing has two elements. First, one rabbit will be interested in the other one’s toys, bedding, or other objects. Then, the other rabbit will permit the first one to explore. Once bonded, rabbits will share toys, food, bedding, and more.

Grooming one another is a clear sign that your rabbits are bonding. One rabbit might prompt the other for grooming with a gentle nudge. Rabbits can also groom each other unprompted, which occurs when they have a deep bond.

Don’t worry if it seems like one rabbit does most of the grooming. It’s something that happens when rabbits have established a hierarchy and is a healthy part of rabbit behavior.

If you notice any of these signs, your rabbits are probably bonded, if not close to being bonded. At this point, you’ll see the rabbits relax in each other’s presence and that’s when playing can begin. Feel free to give your rabbits toys regularly to entertain them.

How to Tell if Rabbits Are Fighting?

If a rabbit fights with another rabbit, the attack will happen quickly. The attacking rabbit will target its victim’s face, stomach, and genitals. This is an aggressive act and will often require intervention to prevent any harm from coming to either rabbit.

Biting is the most obvious sign of a fight. While biting can look similar to nipping, there are significant differences.

A rabbit bite can:

When rabbits bite, they won’t hop backward as they do when nipping. Instead, they’ll usually move forward aggressively.

Other signs of fighting include:

Keep a close eye on the behavior of both rabbits, not just the aggressive rabbit. If the other rabbit appears stressed, you’ll want to intervene.

Why Do Rabbits Fight?

Rabbits fight for many reasons, mainly determined by the type of pairing:

Male vs. Male: Two males are most likely to result in fighting. Males will act aggressively to protect their territory, especially against other males. They’ll also act possessive of their food. If you want to pair males, make sure they’re both neutered.

Female vs. Female: Female rabbits aren’t as territorial as males. Instead, they’re more likely to fight when they’re different sizes from one another. As with two males, two females will also fight over food. One rabbit shouldn’t be significantly larger or more powerful than the other.

Male vs. Female: A male and female pairing is least likely to result in fights, but they can still occur. The most common reason for fighting is when the female isn’t interested in the male. Other causes include size differences and food competition. Spaying and neutering can help reduce the mating urge and related fighting.

In all these cases, developing a consistent feeding schedule to prevent fighting over food and selecting rabbits similar in size, age, and breed will massively help.

How to Respond When Rabbits Fight

Rabbits might fight on occasion during the bonding process. Some fighting doesn’t necessarily mean the rabbits won’t bond with time. However, you also want to stop fights immediately.

If your rabbits are fighting, try to:

Once you’ve separated them you should:

Be careful when handling rabbits that are fighting. Wearing long sleeves and gloves can help protect you from bites and scratches.

What Should You Do If One Rabbit Injures the Other?

If a fight occurs between your rabbits that results in an injury, then you’ll need to carefully check them over. Severe injuries (like skin breakage or impaired movement) will require immediate attention from a vet. Minor injuries (like small scrapes, red marks, and slight hair loss) can heal on their own.

Minor injuries require separation, but the bonding process can continue. Unfortunately, the bonding process should end if one rabbit seriously injures the other. It’s more likely that another serious fight will break out than successful bonding will occur.