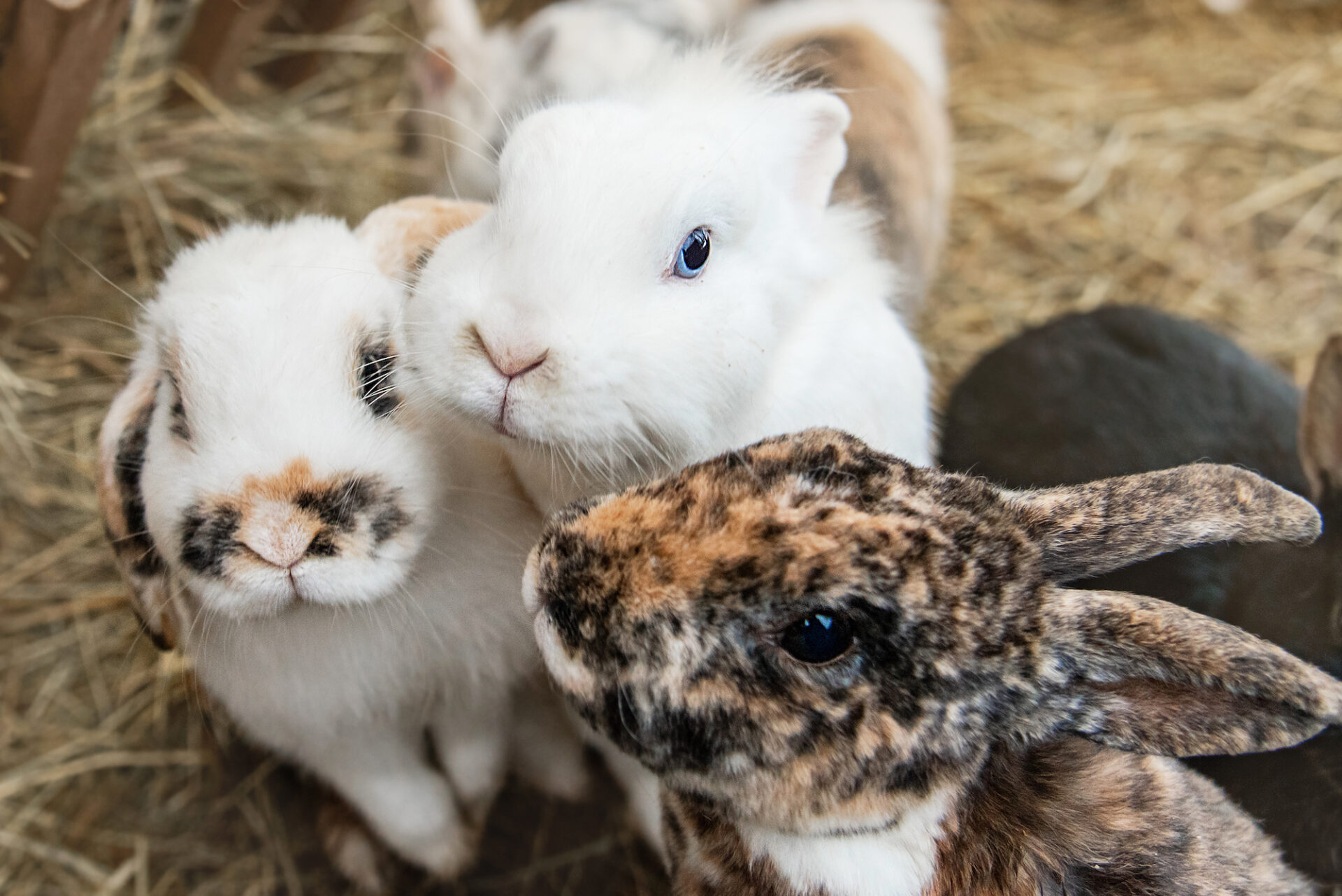 You should always have a minimum of two rabbits living together.  The maximum number of rabbits that can live together depends on if you have the space, finances, and time to look after more rabbits. Usually between two and four is a common amount of rabbits to keep.

It’s extremely important to make sure the rabbits have been neutered before they live together. Read on to find out tips for keeping multiple rabbits, why it’s important to have more than one, and more!

Fun fact: In the wild, rabbits live in huge groups in warrens (underground structures that they dig themselves), often living with their huge, ever-growing families.

Why You Should Have More Than One Rabbit

Rabbits are super social animals that are happiest when they are living with at least one other rabbit. Once they bond, the rabbits will become inseparable – they’ll eat, sleep, play, groom, and even go to the vet together.

It’s so important to get rabbits in pairs (or bigger groups) that some pet stores won’t sell single rabbits. If you can, always get at least two pet rabbits.

Should I Get the Same Gender or Mixed?

When getting rabbits, you can get any combination of breeds, though it’s best if the rabbits are around the same age and size – as younger and smaller rabbits might be bullied by a bigger, dominant rabbit.

You can combine bucks (male rabbits) and does (female rabbits) or have two or more of the same, but the best combination would be a neutered buck and doe.

If you’re planning to have two or more rabbits, there are a few things you need to consider. Pretty much all the resources will be multiplied for each rabbit.

Top Tips for More Than One Rabbit

These top tips should give you a good idea of what to expect and prepare for with having more than one rabbit:

Check out this article on rabbit housing and companionship for more information.

Resources for More Than One Rabbit

Rabbits have certain dietary and living requirements. Having more than one rabbit means you’ll need enough space for them to move and stretch in their cage or hutch. You also will need to clean them regularly – as more rabbits mean more urine and feces.

They’ll also need to have the right diet – ensuring they get enough fiber-rich hay, a variety of vegetables for their vitamins and minerals, pellets, treats, and a constant supply of drinking water. Make sure each rabbit is getting enough and staying healthy.

Rabbits also need toys for enrichment and time for you to bond and play with them. It’ll cost you more money to take care of more animals, and also more time – but the effort is worth it for loving, loyal pets!

How Do I Know if My Rabbits Have Bonded?

Bonding takes time, but these signs will indicate that the rabbits are comfortable with each other: they’ll eat around each other, lay down around together, and once they groom each other you know that they’re bonding.

Why Aren’t My Rabbits Getting Along?

Even if you have two neutered rabbits that you’ve introduced and tried to bond, it might not go as smoothly as you hoped.

This could be because they’re fighting and both trying to be the dominant rabbit. It might be that the two aren’t compatible but there are a few things that you can still try.

To learn more, check out this advice on rabbit bonding.

How Do I Know if My Rabbits Are Fighting?

be mistaken for fighting, but the signs are a little different. Fighting can look like: growling, boxing, chasing, flattened ears, raised tail, and biting where it draws blood. You should intervene between fighting rabbits (where it can be done safely).

What if One Rabbit Dies From a Bonded Pair?

Unfortunately, one rabbit often dies before the other. Rabbits will grieve their partner, and miss them. If a rabbit is used to living with another, they’ll probably struggle to suddenly have to live alone. You should strongly consider getting another rabbit (of similar age and size) and allow them some time to bond and get comfortable together.