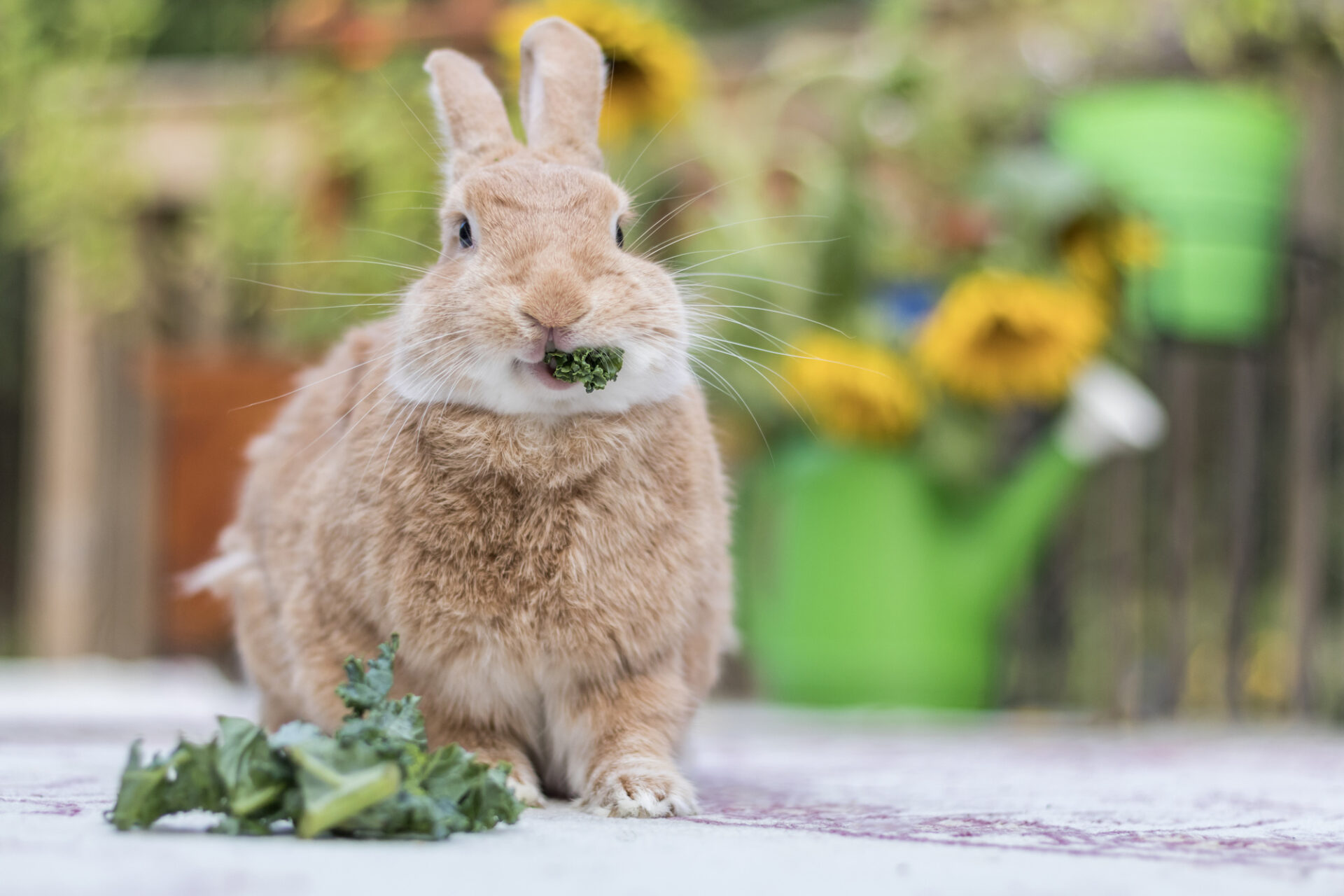 Yes, your rabbit can eat kale – and they’ll probably love it! Kale is a green leafy vegetable which is exactly the type of food that should make up the fresh vegetable proportion of your rabbit’s diet.

You need to be careful not to overfeed kale to your rabbit. Too much kale can cause health issues for your rabbit so remember – moderation is key.

There are several types of kale that your rabbit can eat:

All of these can be served in small amounts to your rabbit.

Kale is rich in fiber – which is great alongside hay and grass to keep your rabbit’s digestive system moving.

Several vitamins can be found in kale – including vitamins A, C, and K. Between them, these vitamins can maintain a healthy immune system, keep their reproductive organs working smoothly, and help towards strong bones (amongst other things).

Minerals such as magnesium and potassium are also found in kale. These contribute towards the healthy, balanced diet your rabbit needs.

Kale contains calcium too. If your rabbit isn’t getting enough calcium from the rest of their diet, kale can be the extra boost that your rabbit needs for their balanced diet.

If you’re not careful, your rabbit could end up overeating kale and end up with health issues. One of these issues is if your rabbit has too much calcium, as it can lead to urinary problems that may need intervention and cause a lot of discomfort for your rabbit.

Kale doesn’t contain everything a rabbit needs for nutrients, so it should be part of a bigger diet. If your rabbit only eats kale then it’ll cause a bunch of health problems.

How to Feed Your Rabbit Kale

If it’s the first time your rabbit is eating kale, make sure you only give them a small amount and monitor their response over the next day. If they don’t have any negative reaction, it’s safe to increase the portion next time.

Washing the kale before giving it to your rabbit is a good idea. It could be coated in chemicals or pesticides from when it was growing. The best option is organic kale – which you can grow in your own garden and know that there aren’t any chemicals on it that won’t agree with your rabbit’s digestion.

Check the kale leaves to make sure that they aren’t moldy or damaged too. If they are, remove them and replace them with fresh, good kale.

No, you shouldn’t give your rabbit cooked kale. Raw kale is always better as it doesn’t lose the nutrients Cooked kale will also have a softer, more watery texture – which will make it harder for your rabbit to digest.

No, you shouldn’t give your rabbit canned kale. This is because it’ll have more salt and added preservatives. This makes it last longer in the can, but also means that it’s far more unhealthy for your rabbit.

Yes, rabbits can eat frozen kale. In fact, kale is one of the few vegetables which is great frozen and fresh. Freezing typically changes the texture of the vegetable – but in this case, it doesn’t. It’s a smart idea to have some frozen kale stored that you can thaw and give to your rabbit anytime.

Yes, if wild rabbits came across kale they would definitely eat it. Wild rabbits are at risk of over-eating kale and facing the issues associated with having too much.

What Else Do Rabbits Eat?

Your rabbit should have a diet mainly consisting of hay (around 80-85%). They should have up to 10% fresh vegetables, 5% pellets, and occasional treats on top. All of this should be given to your rabbit with clean water.

Yes, kale stems are safe for your rabbit to eat. The stems contain the highest fiber content in kale. You should wash them thoroughly and cut them into small pieces to reduce the chance of your rabbit choking on them.