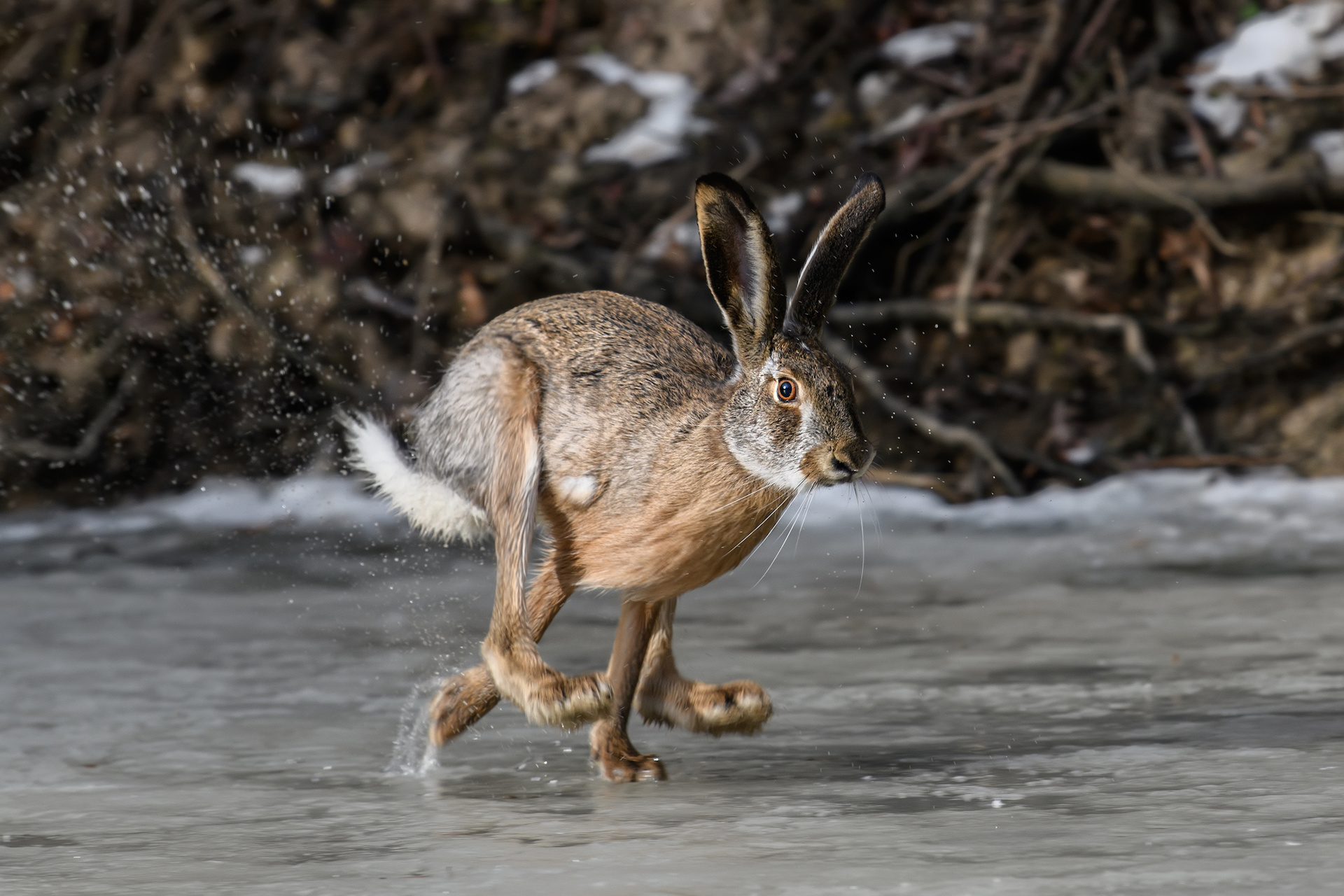 Rabbits can run around 30mph on average – with some wild jackrabbits reaching up to 45mph and certain slower breeds of domesticated rabbits being capped at 25mph. One thing is for sure – they’re certainly faster than us humans!

Rabbits tend to run in bursts of speed (e.g., if they’re escaping a predator), but they can’t run at 30mph for extended periods. They’re sprinters, not marathon runners.

Read on for more information on rabbits running including how they run so fast, why they need to run so fast, and comparisons with other animals’ top speeds.

How Can Rabbits Run So Fast?

A rabbit is designed to make a quick getaway. Their powerful hind legs can propel them into motion from standing still.

Rabbits have fast-twitch muscle fibers that are used for speed and acceleration (the opposite is slow-twitch and used for endurance). This means that they reach top speeds quickly as their leg muscles can generate force for quick bursts.

When you consider how small a rabbit’s legs are, it’s even more impressive how fast they run!

Why Do Rabbits Need to Run So Fast?

Rabbits need to be fast runners as part of their survival. They have several options when they’re in danger, including fighting their way out of it or running to safety.

Being fast runners, rabbits can often outrun predators like birds, foxes, coyotes, and wolves. Along with zig-zag motions, flashing their tail, and memorizing routes, their speed can give them the extra advantage they need to reach their warren or a hiding place.

Though rabbits can choose to fight – kicking, biting, and boxing in some situations – running away is a safer option if it’s a fight they might not win.

Comparison to Other Animals’ Running Speeds

Knowing how fast rabbits can run might not seem so impressive until compared with other animals.

Are you surprised at where a rabbit ranks on this list?

If you have pet rabbits, you might notice that sometimes they’ll start sprinting around your yard or home, sometimes accompanied by a binky (a jump and twist movement that they do when they’re happy).

This running is called ‘the zoomies’ and is often seen when a rabbit is excited or happy about something. It could be because they’re excited to be outside on a warm day or if they realize that they’re about to be fed some tasty greens (amongst other reasons).

As a rabbit grows older, you’ll see this less frequently. But although it makes them almost impossible to catch, it’s a sure sign that you have a happy rabbit.

How Much Exercise Do Rabbits Need?

A rabbit needs somewhere between 2-4 hours of exercise per day. This means being let out of their cage or hutch and having the space to properly stretch their legs and move around. The exact amount will vary based on the age, fitness, breed of your rabbit (amongst other factors).

Exercise is important for rabbits – it can prevent obesity, boredom, and keep them as healthy as possible. It can be spread through the day or blocks together, but you should avoid keeping them cooped up for hours on end.

Other ways to let your rabbit get the exercise they need if they can’t free-roam include taking them on a walk and getting a pen for them to have a specific area they can go in outside.